Acknowledgements
The authors gratefully acknowledge the management of the Al Hosn Gas for permission to publish this manuscript.

• Detailed core description of multiple wells within a giant gas field in the United Arab Emirates (UAE) has enhanced the understanding of the depositional make-up and possible controls on depositional style for the Arab Formation. In this field, the Arab Formation differs from other areas such as Qatar in that anhydrite and dolomite are scarce in the lower units of the Arab Formation and recognition of any
sequence-stratigraphic boundaries is limited. In summary, the limestone-dominated reservoir units combine to reflect a large-scale shallowing-upwards trend from basinal/outer, mid-ramp to inner-ramp depositional settings, based on core-derived facies association analysis. The facies associations are defined according to sedimentological and faunal characteristics and form genetically related, larger-scale units reflecting a low-energy, mid- to outer-ramp depositional setting, which grades sharply into an inner-ramp shoal and shoal complex depositional setting.

• Within the low-energy units of the lowest Arab Formation reservoir, mudstones are interbedded with bioclast-rich accumulations of variable thickness and an uncertain origin. The vertical spacing of these units may be a function of random/non-random cyclicity (?Milankovitch) and reflect variation in depositional slope angle and hence slump/debrite deposits or deeper-water faunal communities. The transition from the distal depositional setting to the proximal depositional setting occurs over a relatively narrow zone into oolitic grainstones as the system progrades. The grainstones form a thick sequence of bedded units reflecting both shoal and intershoal areas within an inner-ramp depositional setting, but cyclicity is not apparent in this interval.

• The small-scale cyclicity present in the lower units of the Arab Formation may potentially be equal to those that are defined by dolomite-anhydrite cycles in Qatar, but in this area of Abu Dhabi, the overall distal setting has negated the development of these mixed evaporite-carbonate cycles. The implications of this includes a lack of intraformational seals and a uniformity of lithofacies (i.e. limited variation), which is also expressed in the more proximal inner ramp deposits and provides for good reservoir potential.

• Within the Arab D unit, shell-rich beds composed of disarticulated bivalves, comminuted bivalve debris, benthic foraminifera and gastropods form sub-deci-feet to rarely deci-feet scale beds of wackestone to packstone to floatstone that are interbedded with dominant mudstones.
• These beds are observed to have a variable spacing between each other vertically, which may be attributed to non-random cyclicity (?Milankovitch), random cyclicity (autocyclic/allocyclic processes) or are non-cyclic.
- Autocyclic (autogenic) model invokes localised controls on depositional stacking patterns to control cyclicity (Ginsburg, 1971, Osleger, 1991).
- Allocyclic (allogenic) mechanisms require extrinsic factors, such as episodic regional subsidence, to generate cyclicity (Fischer, 1964; Grotzinger, 1986).
- Milankovitch cycles reflect climatic variations associated with orbital forcing (Crevello, 1991; Fischer 1988).
• Points that will be considered in this poster include:
- Consideration of evidence for cyclic origins of the shell-rich beds versus non-cyclic origins
- An evaluation of the dataset and its limitations for making such interpretations.

• In order to determine whether the shell-rich beds were deposited under the influence of cyclic processes, an understanding of the various types/scales of cycles is needed. These are briefly summarised here:
• Supersequences (1st -2nd Order cycles)
- Icehouse-greenhouse influences
• Composite sequences (3rd Order cycles)
- Basis of Exxon global cycle chart (Vail et al. 1977)
- 1-3my (Haq et al. 1987)
- 1-10my (Goldhammer et al. 1991)
- Climatic/glacio-eustatic variation
• High-frequency Sequences (4th-5th Order cycles)
- 20-400ky sea level cycles reflecting:
- Milankovitch-band glacio-eustacy (Koershner and Read, 1989)
- Or productivity/oxygenation (Fischer and Bottjer, 1991)
• Milankovitch cyclicity describes collective effects of changes in Earth orbital movements summarised in Hays et al. (1976).
• A large number of papers and books now infer orbital forcing (Milankovitch cycles) on sedimentary sequences that show cyclicity including De Boer and Smith (1994), but not everyone agrees ..... e.g. Drummond and Wilkinson (1993).
Thin shell-beds within mudstones of the Arab D interval cored in one well from a giant oilfield in the U.A.E., give the appearance of cyclical-driven sedimentation, and it is this, which has led to the review of the mechanisms for determining cyclicity addressed in this poster. 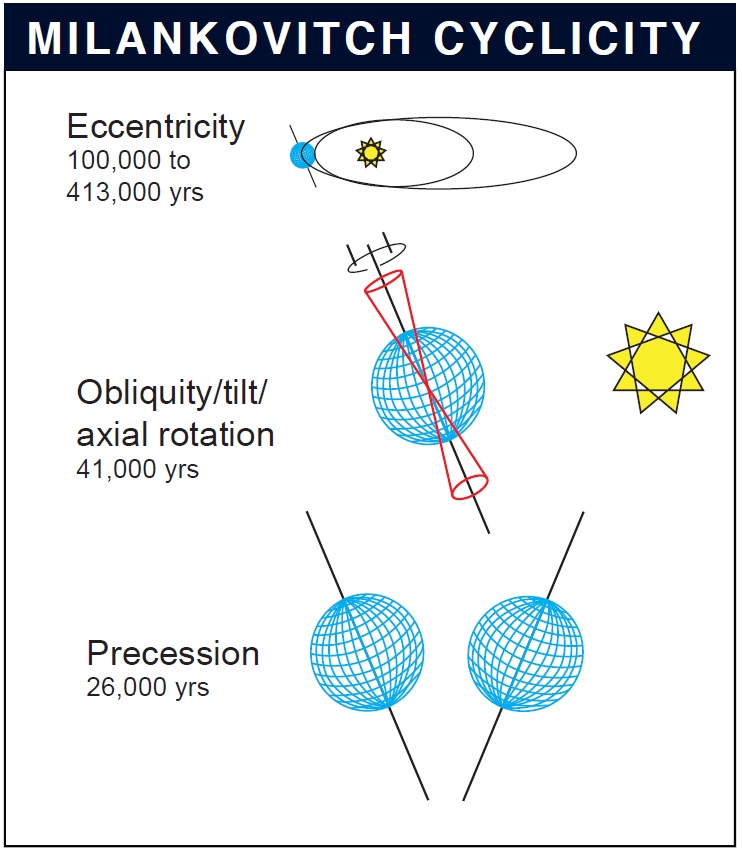 Can cyclicity really be determined in thin bed-dominated sequences?

4: Approach to Data Collection and the Data Set

• In the studied cored interval, the sediments are characterised by:
- Mudstones, which dominate the lower Arab D unit, are characterised by laminated, bioturbated or massive fabrics.
- Variably thick shell-rich beds, which separate and are interbedded with the mudstones. These range from wackestones, packstones to floatstones, based on Dunham (1962) and Embry and Klovan (1971) classification schemes.
• The shell-rich beds are characterised by:
- Typically sharp beds. Gradational beds are rare. Some stylolitised contacts affect the depositional assessment.
- Bed composition falls into 3 key groupings - bivalve-dominated, benthic foraminifera-dominated and minor shell/skeletal abundances.
• Large-scale trends are recognisable in the combined Arab D/C succession by an upward change from mudstone to ooid-grainstone dominated lithofacies.
• However, high-order sequence stratigraphic cycles (parasequences, cf. Vail et al., 1977; Crevello 1991), are difficult to distinguish in the mud-rich Arab D, due to the sporadic occurrences of shell-rich beds.
• These thin shell beds in the Arab D unit may reflect storm-derived deposits driven by high-frequency sea level variation and as such, are important observations. 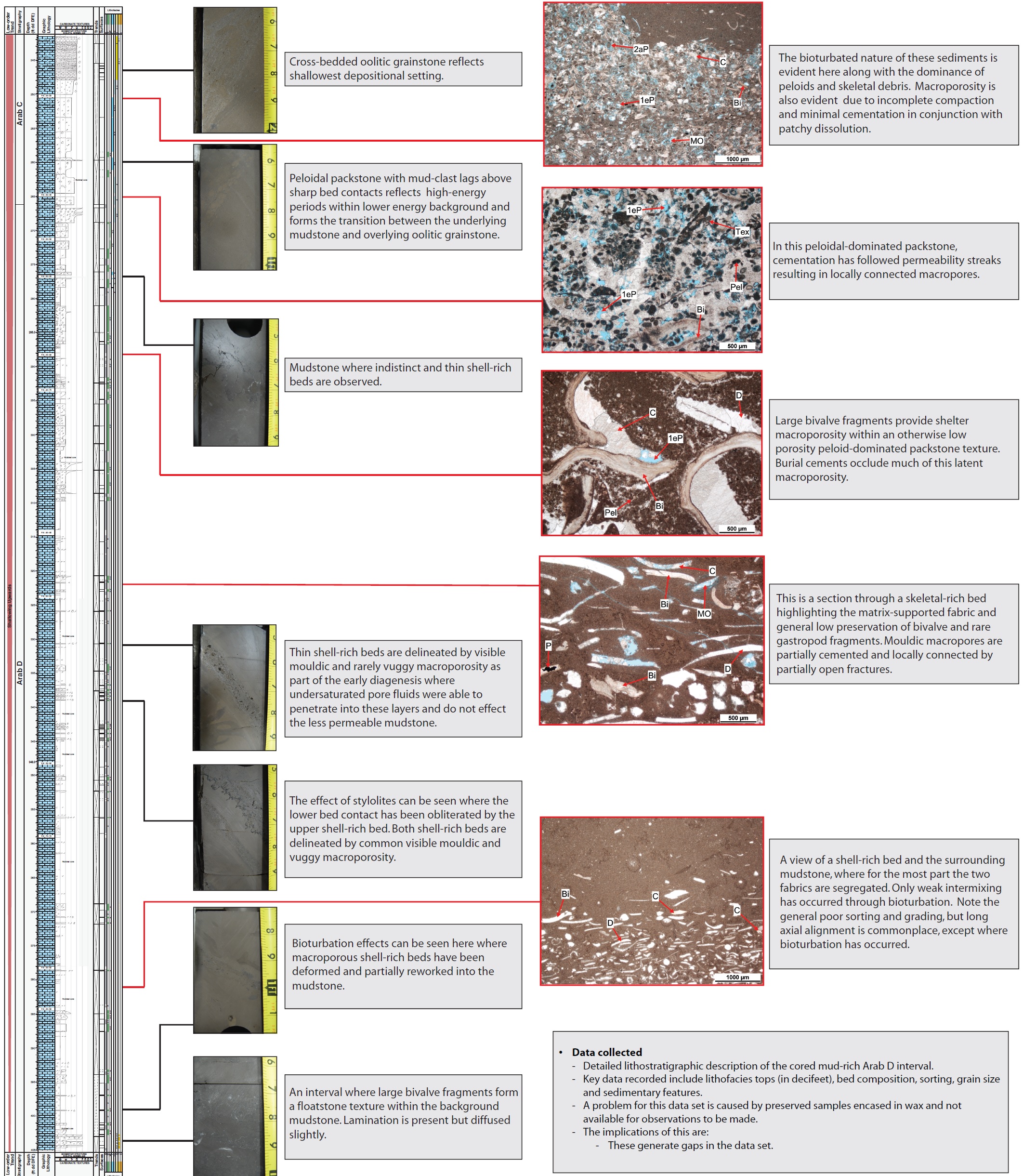 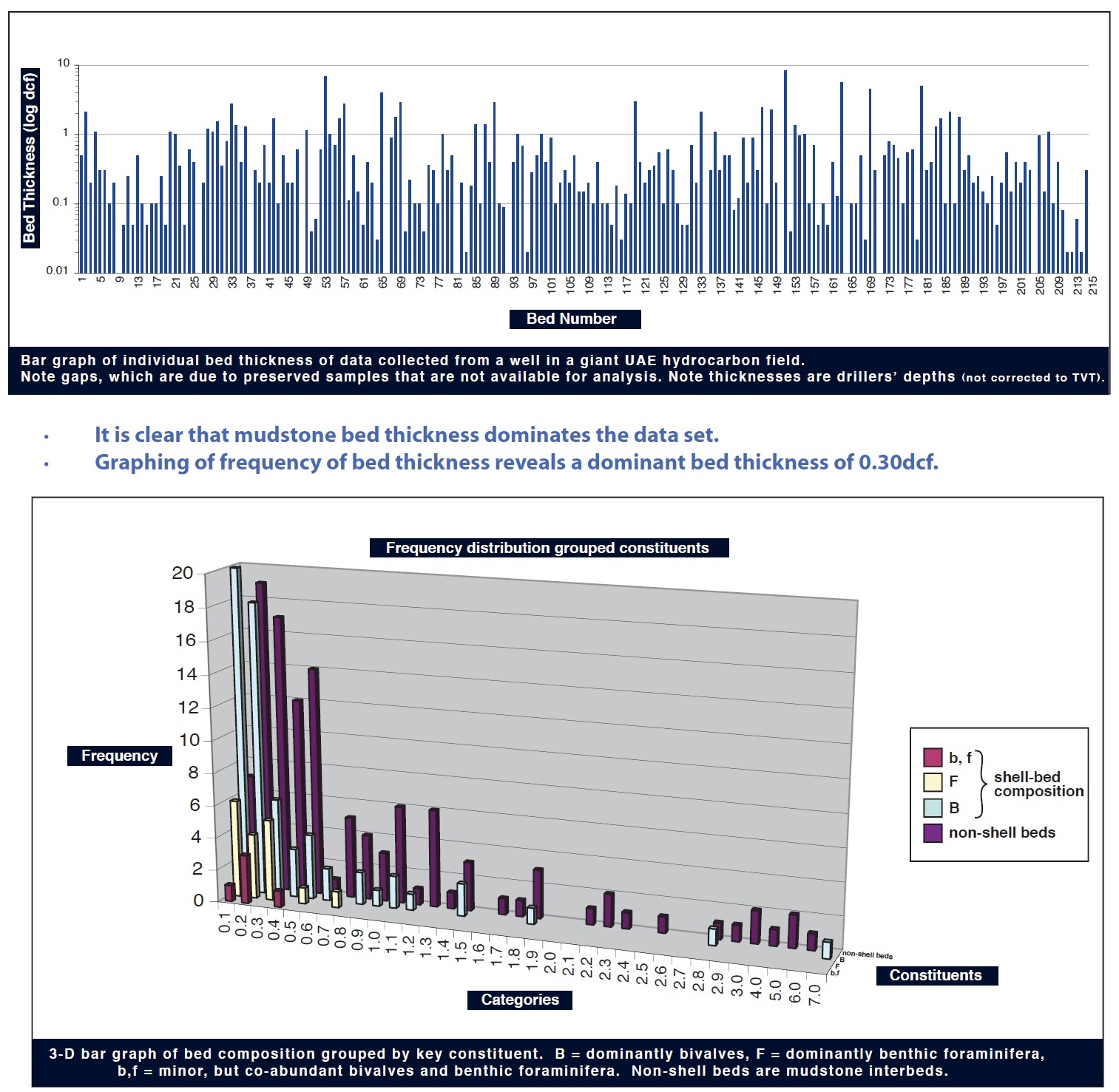 6: Origin of Shell-rich Beds and the Influence of Sea Level

• The probable origin for most of these beds is likely to be storm-generated, downslope reworking of skeletal debris.
Evidence:
- The abundance of sharp basal contacts.
- Lack of upward-fining.
• Thus they may be pulsed events rather than cycles.
• The periodicity between these events is likely to be reflected by mudstone bed thickness.
• Although Fourier/spectral analysis has not been conducted for reasons outlined below, recognition of Milankovitch-based cyclicity remains uncertain.
• However, the storm interpretation infers a component of climatic control and planetary influence.

Other options can be equally valid - what is your opinion?

• Traditional techniques for determining high-frequency cyclicity
- Bed thickness is related to sedimentation rate and can be use to create a time series for Fourier/periodicity analysis (e.g. Villamil, 1996, Schwarzacher, 1975, 1993):
- To relate thickness of cycles to duration (time):
- The cycle (parasequence) needs to be defined:
- Conventionally, these are either fining-upwards or coarsening-upwards trends with a prescribed thickness.
- Bundling of shell beds (Badenas et al., 2003) may be an alternative for cycle definition.
- A means of determining sedimentation rate is required:
- Using biostratigraphical assemblages (e.g. Martin et al., 1996).
- Knowledge of differing carbonate factories and associated sedimentation rates (e.g. Schlager, 2005).
• Uncertainties in the Arab D:
- Do the shell-beds define the base or the top of the cycle, or both?
- Is there sufficient biostratigraphical control? No
- Is the sedimentation consistent through time? Unlikely
• The mathematics is complex and does require data conditioning, which includes:
- Removal of thin-beds (culling cf. Miller et al., 1997).
- Continuous interval with contiguous sampling (Weedon, 1991), that is typically smaller than the thinnest bed encountered in the Arab D.
- Implications:
- Over-conditioning of data results in possible removal of thin shell beds and hence small-scale, high-frequency cycles.
-  A larger pitfall is the consistency of time control compared to the stratigraphic record (Villamil, 1996).
- The preserved sample gaps, if excluded, divide the data set into a series of short intervals cause bias in interpreted cyclicity.

Based on the techniques available and the limitations listed above, can cyclicity really be determined in this thin bed-dominated sequence?

• Further work
- Clearly a data set needs to be collected from the lower Arab in this area which is contiguous and continuous such that any large and small-scale cyclicity can be recognised through Fourier analysis.
- Storm reworking as a depositional mechanism is one reasonable conclusion from the data at hand, but others are possible.

What additional data is required to further investigate potential cyclicity?