Sedimentology and depositional setting of the Asl and Hawara Members, October Field, Egypt

Acknowledgements
The authors gratefully acknowledge the management of BP and GUPCO for permission to publish this manuscript.

AIM
The study was initiated by BP/GUPCO in order to:
• assess the sedimentology and petrology of the cored Asl and Hawara Members in October Field, Egypt (Fig. 1A),
• determine the depositional framework and diagenetic overprint and how they relate to the tectonic setting,
• place the October Field into a depositional and reservoir framework to facilitate prediction of deposits with optimal reservoir properties. 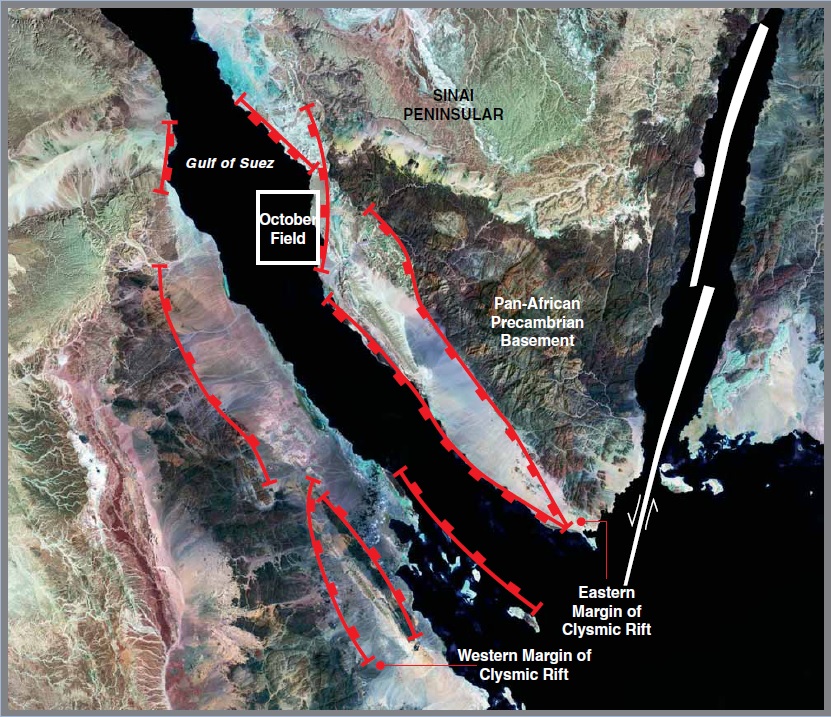 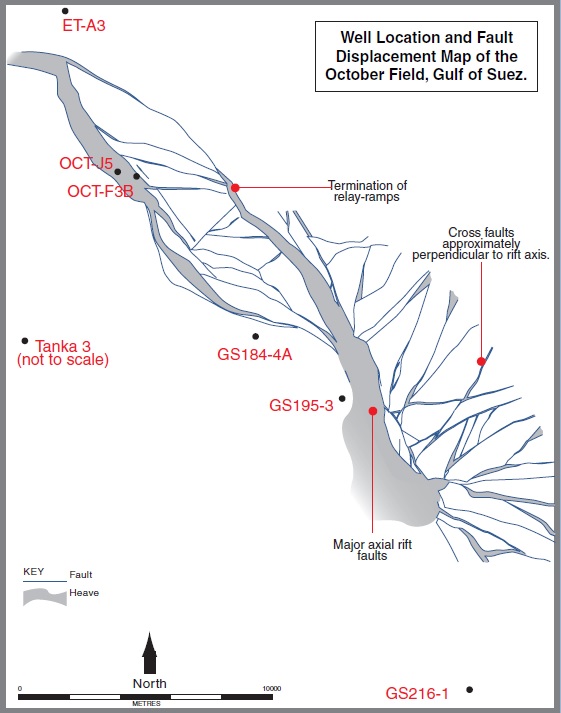 APPROACH
• Detailed 1:50 scale logging of 936ft of core from 7 wells of the October Field (Fig. 1A).
• Examination of 539 thin-sections to assist with lithological classification and provide an initial assessment of diagenetic modification and reservoir quality.

CONCLUSIONS
• Two principal lithofacies were observed: carbonate-rich packstones and grainstones and medium-grained quartz-rich sandstones; the sandstones occur repeatedly as coarse-grained and fine-grained elements that reflect the evolution of a turbidity current/fan system.
• Gravity flows are the dominant depositional processes.
• Uplifted fault blocks provided sediment sources and established sediment bypass zones along cross faults and relay-ramps.
• Carbonates formed on uplifted blocks while siliciclastic material was derived from those fault blocks as well as from exposed older source areas and erosion of the sidewall stratigraphy along transform faults.
• Reservoir quality is controlled by a combination of primary depositional fabric and subsequent diagenetic modification.
• Thick, porous sandstones retain their primary interparticle porosity whereas thinner sandstone lithologies are more extensively cemented by calcite and contain relatively isolated macropores.
• Uplifted fault blocks provide poor reservoir targets due to the lack of siliciclastic material, abundance of cemented carbonate material and sediment starvation. Palaeotopographic lows, however, will provide the best reservoir targets due to the presence of thicker, relatively uncemented sandstones.

Figure 1B: Stratigraphy and Geological Summary 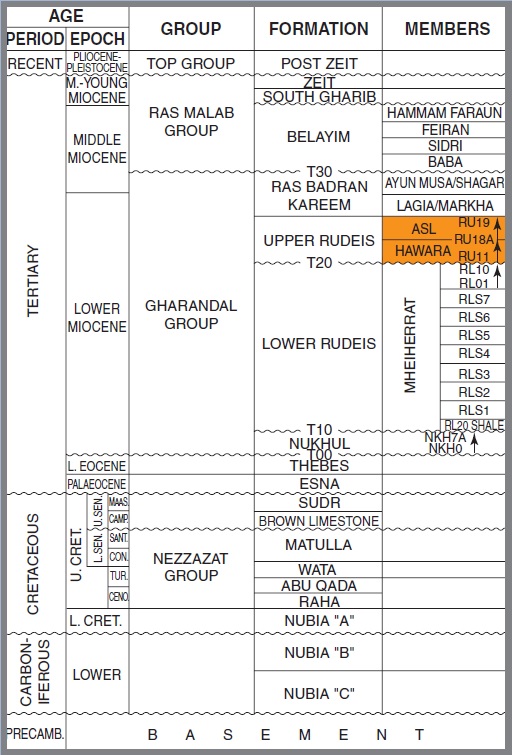 Early Miocene
Initial isostatic uplift and rotation of rift shoulders rearranged drainage systems that delivered sediment to the basin. Consequently fluvial flow was directed away from the rift causing sediment starvation in deeper parts.
As drainage systems re-equilibrated, deltas formed on the rift margins and transported coarse clastic sediments into the rift. This phase of tectonic evolution of the Suez Rift is documented by the Mheiherrat Member (designated T20, Fig. 1B). Following initial isostatic uplift, thinning of the crust caused further isostatic uplift of the basin and increased fault block rotation.
New sedimentary patterns were established within, and on the margins of the rift, and deposition is characterised by the Asl and Hawara Members (designated within T30, Fig. 1B).
Within these members, carbonates accumulated on uplifted parts of fault blocks and sands accumulated in low areas in front of the faults.
At Wadi Baba, (Fig. 1A) the change in sedimentation is marked by shallower water deposition and an increase in sand content.

GEOLOGICAL CONTEXT AND SUMMARY OF THE TERTIARY IN THE OCTOBER FIELD REGION
The Asl and Hawara Members have traditionally been placed as part of the Lower Miocene Rudeis Formation (Fig. 1B). Structural complexity (Fig. 1A), and resulting stratigraphic complexity, arose from the Gulf of Suez as a rift system.

SEDIMENTOLOGICAL FRAMEWORK
Detailed description of the cored intervals of the Asl and Hawara Members reveals:
• A succession of mixed carbonate-siliciclastic allochthonous lithologies (Fig. 2A).
• A four-fold hierarchical division of lithological heterogeneities (Fig. 2B). 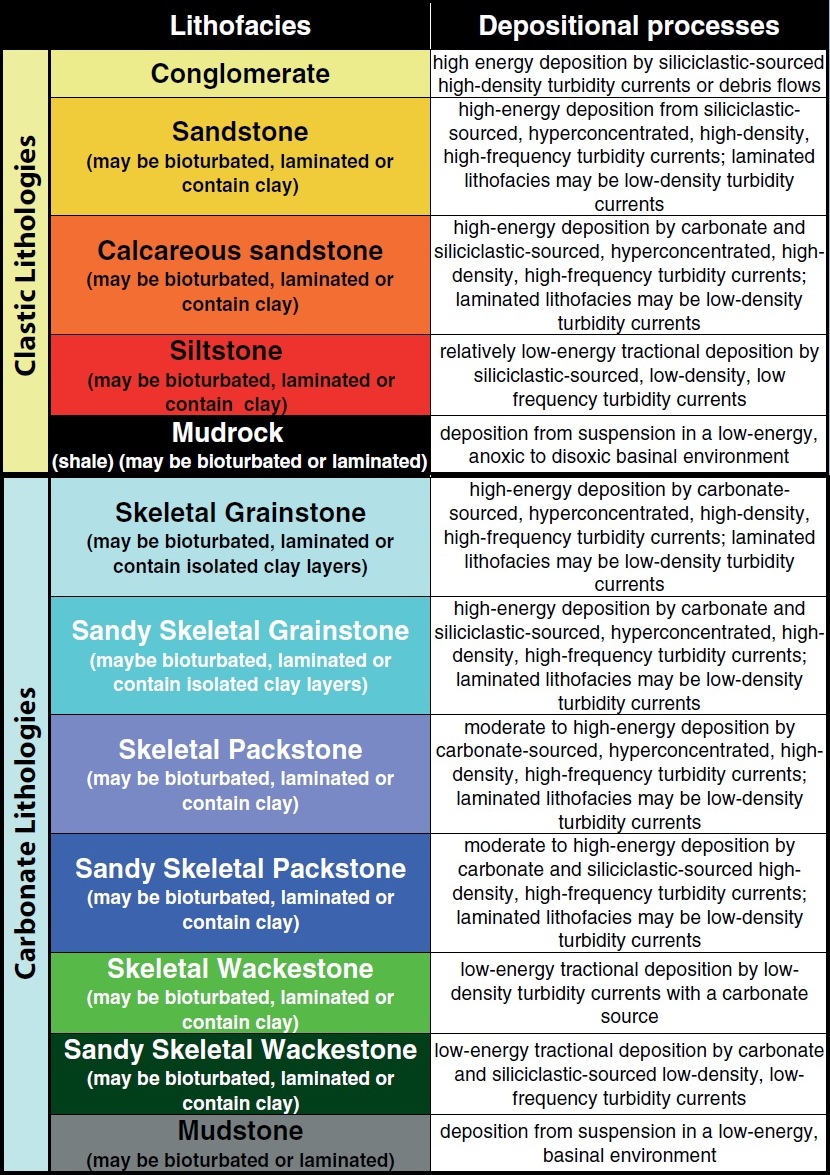 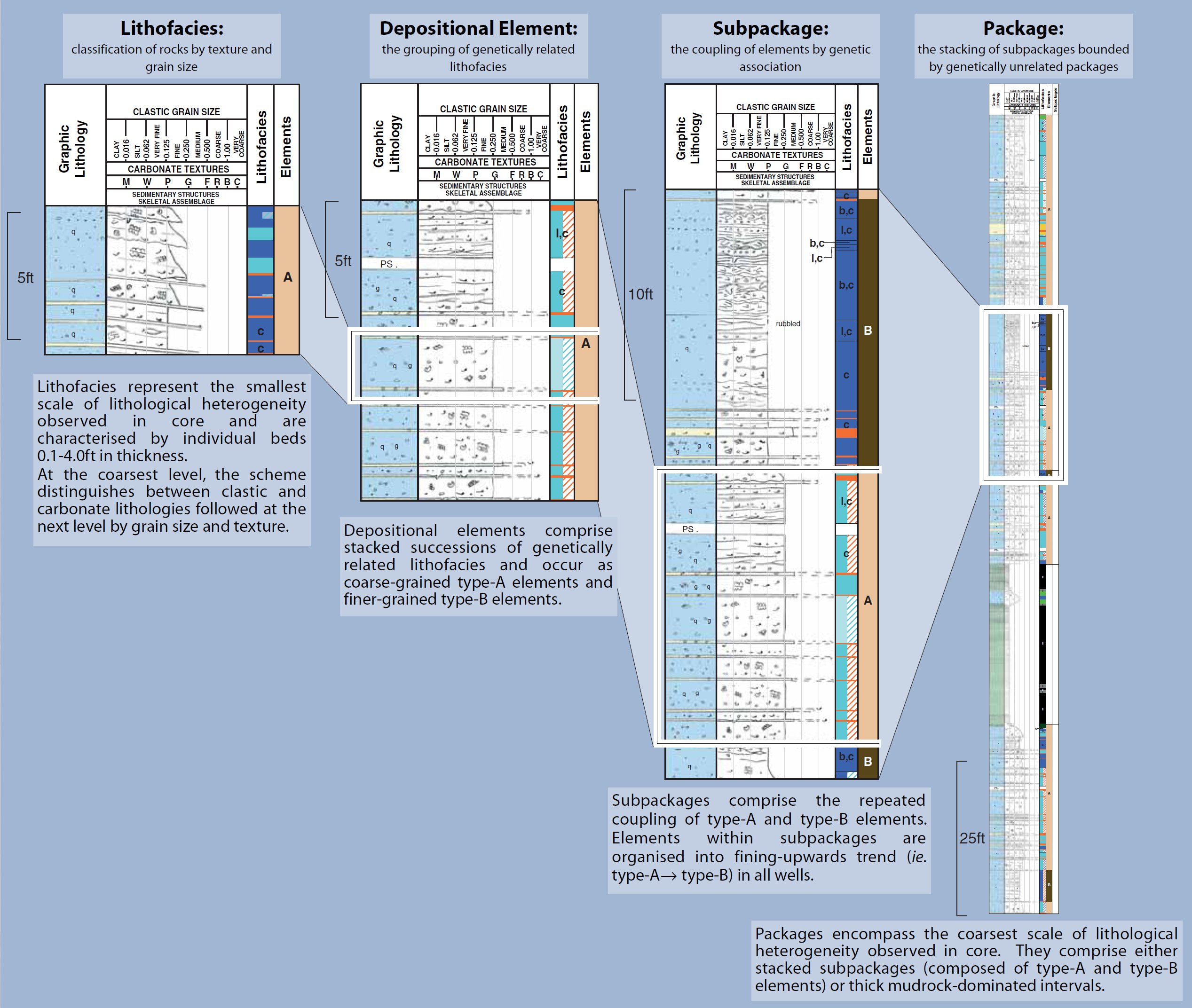 DEPOSITIONAL ELEMENTS
Lithofacies classification is up-scaled into two types of depositional element which are defined by (intervals of similar) texture and grain-size; type-A (coarse-grained and laminated) and type-B elements (fine-grained and bioturbated). Both elements may be either clastic (Fig. 2C) or carbonate dominated. (Fig. 2D).

Observations and conclusions:
• Repeated stacking of elements suggests that depositional energy levels were fluctuating on a regular basis.
• The alternation between carbonate and clastic lithologies suggests multiple sediment pathways.
• This alternation of energy regimes is, in the palaeogeographical context of the Gulf of Suez, best explained by a submarine fan system. 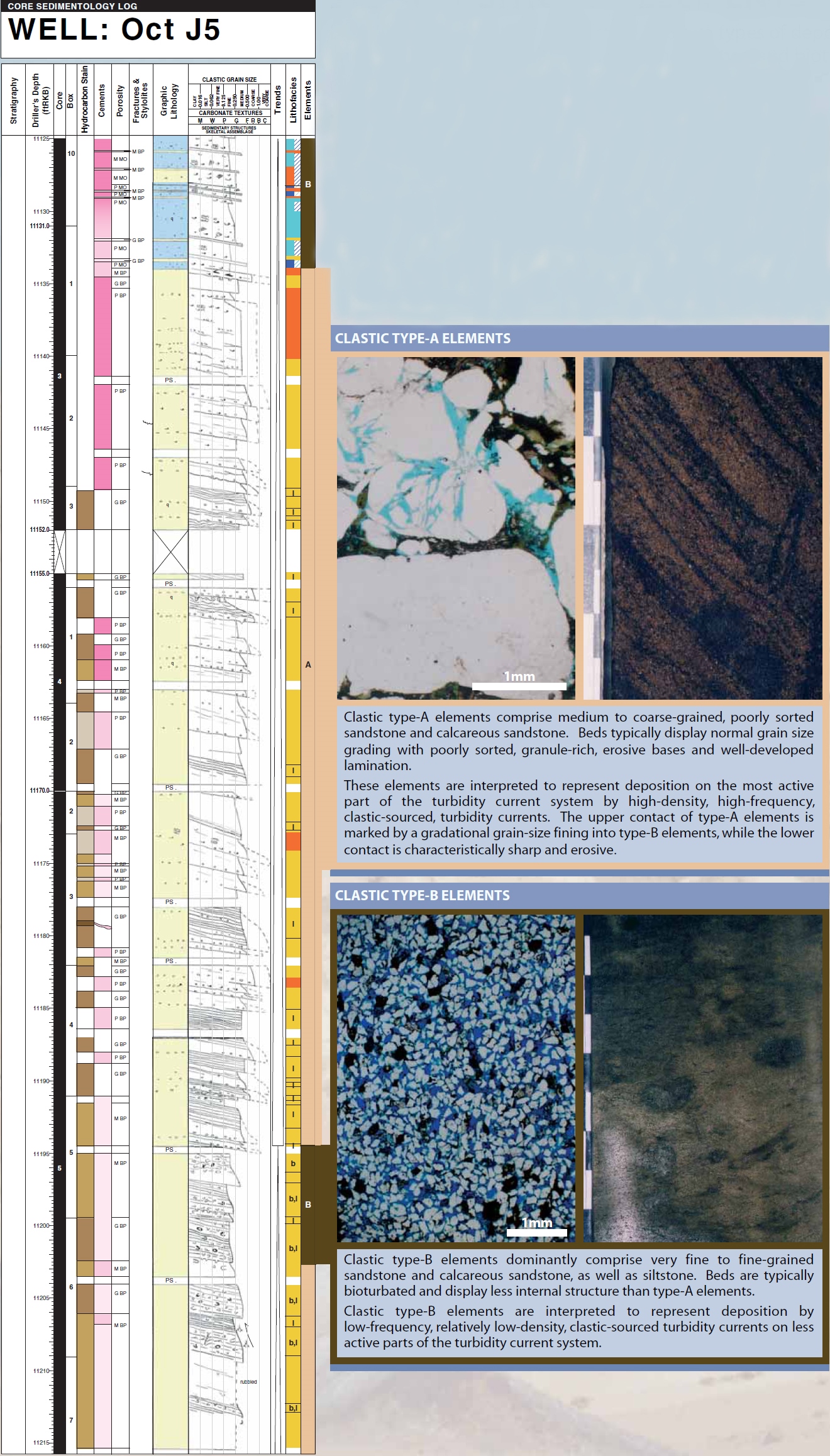 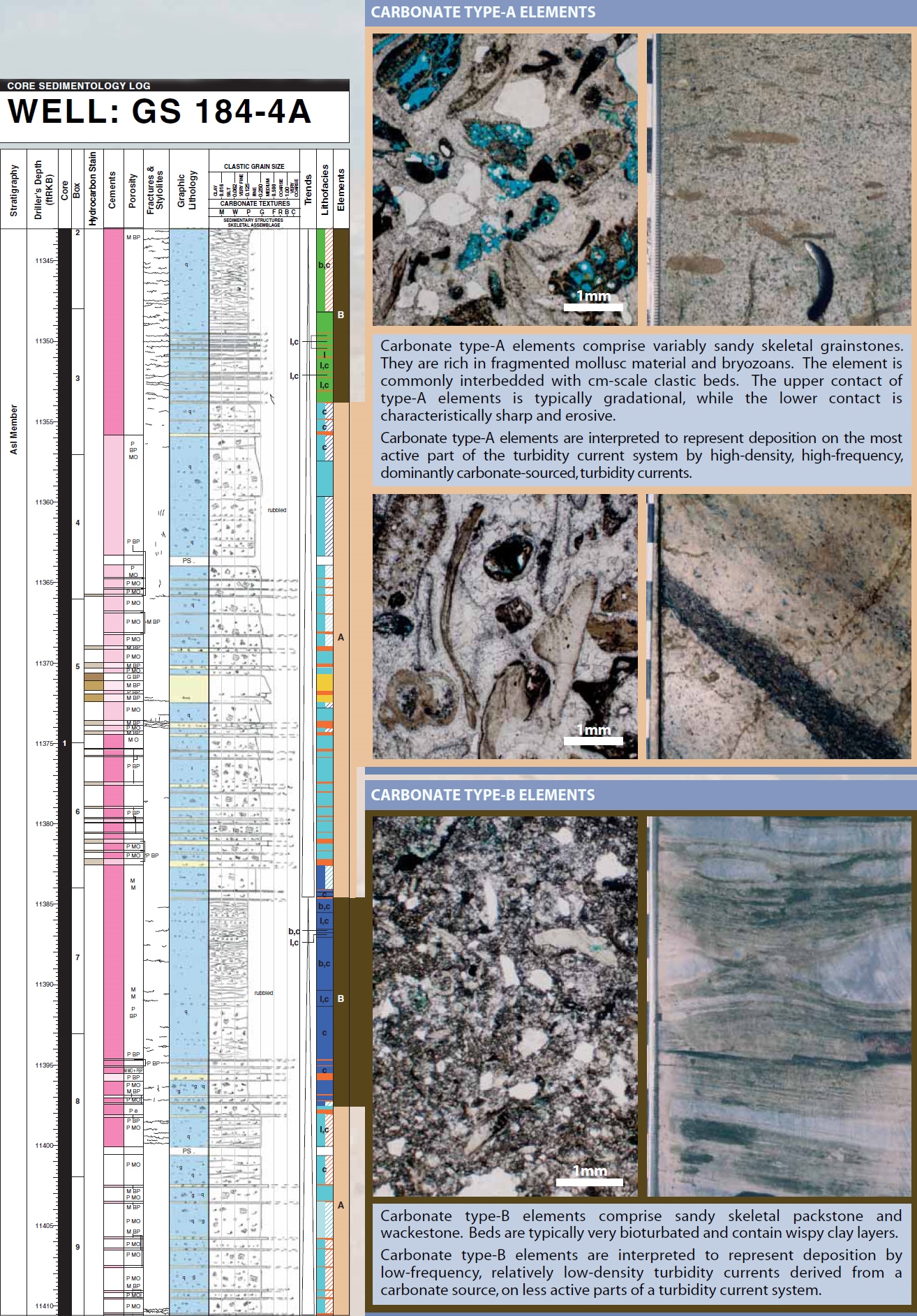 LARGE SCALE RESERVOIR HETEROGENEITY
Subpackages and packages represent the largest scale of heterogeneity observed in core, and will have important implications for the distribution of reservoir quality and compartmentalisation.
• A subpackage comprises a couplet of a type-A and type-B element (Fig. 3B).
• Packages may comprise stacked subpackages of coupled or genetically unrelated lithologies such as shales (mudrocks) (Fig. 3B).
• Packages and subpackages can occur in proximal, mid-fan and distal fan settings. 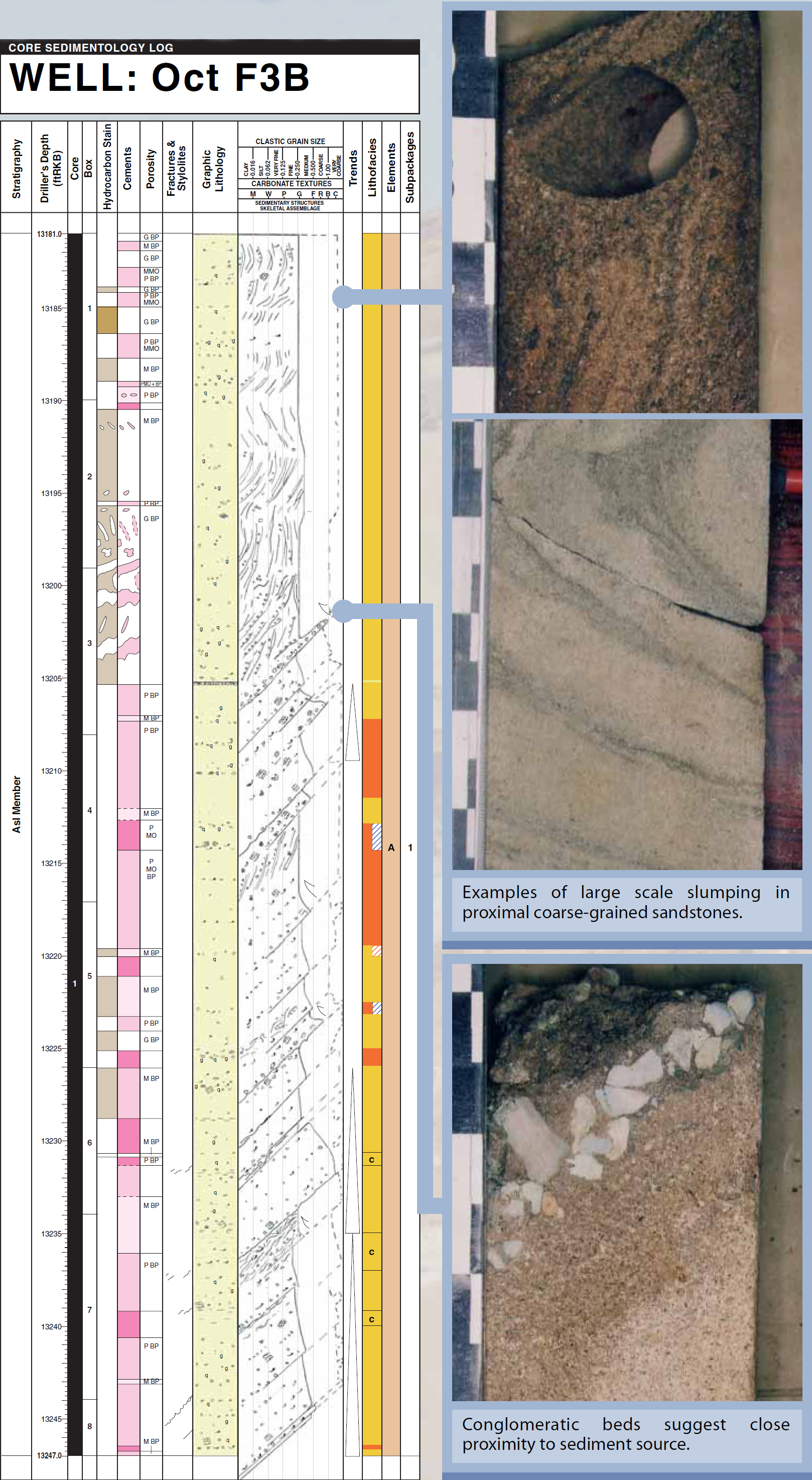 Figure 3B: Mid-Fan Deposition
• Mid-fan lithologies are fine to coarse-grained and moderately sorted reflecting moderate energy levels and transport distances.
• A mid-fan environment is less confined and of lower energy than a proximal fan environment and although type-A depositional elements are dominant, type-B elements are interspersed. 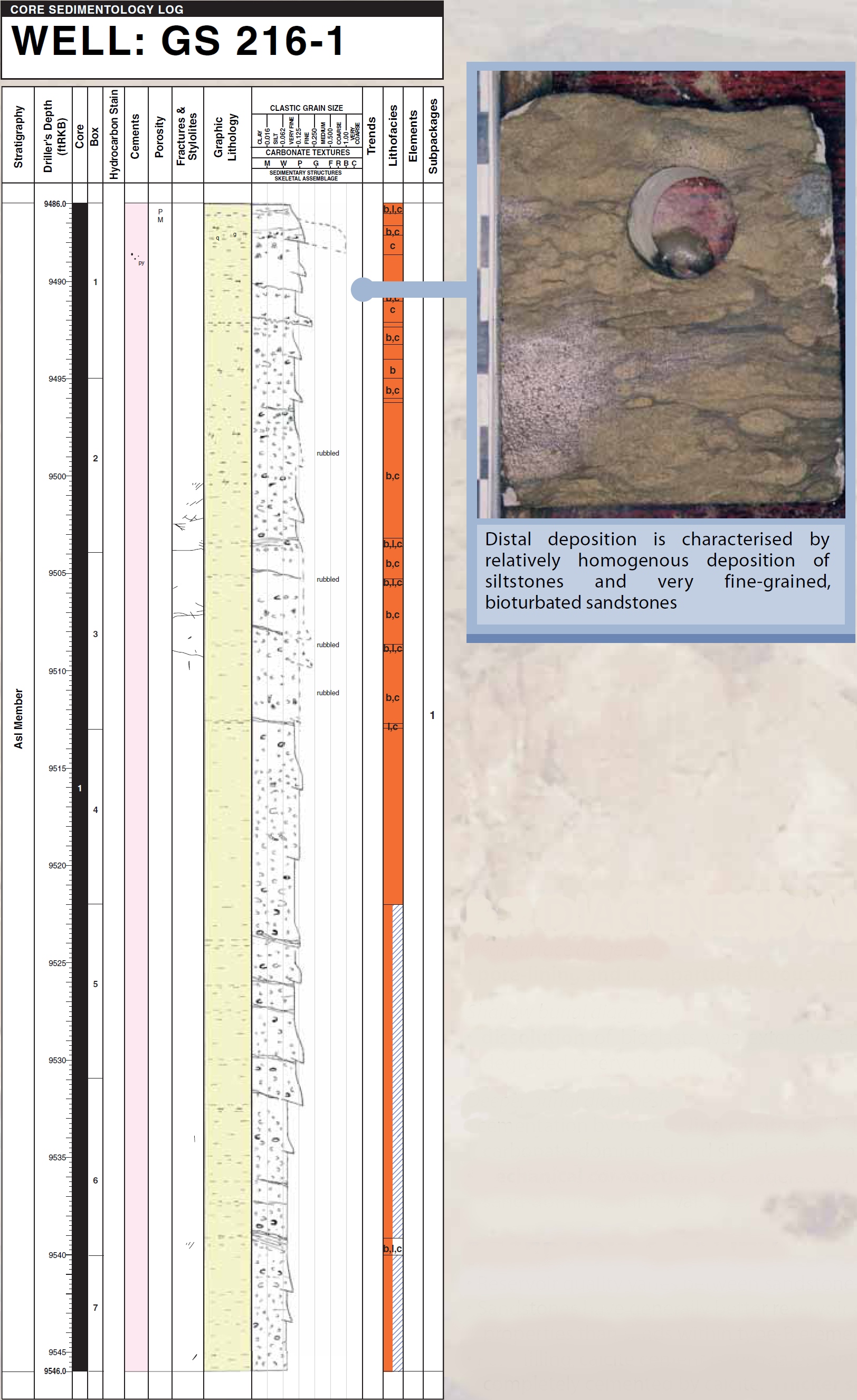 DIAGENESIS AND RESERVOIR QUALITY
Near surface diagenesis
• pore-lining and intraparticle fibrous cements. These cements occur within body chambers of many bioclasts, but only occlude the smallest pores.
Shallow burial diagenesis
• dissolution of bioclasts was extensive and initially improved reservoir quality. Subsequent cementation of these pores by calcite-saturated pore waters degraded reservoir quality.
Deeper burial diagenesis
• cementation by pore-filling calcite spar is the dominant cement phase and it fills most primary and secondary intraparticle and interparticle macropores both in carbonate-dominated and siliciclastic-dominated lithologies.
• mechanical compaction is considered to have been continuous throughout burial history and is likely to have reduced primary pore size, especially in porous, sand-dominated intervals. 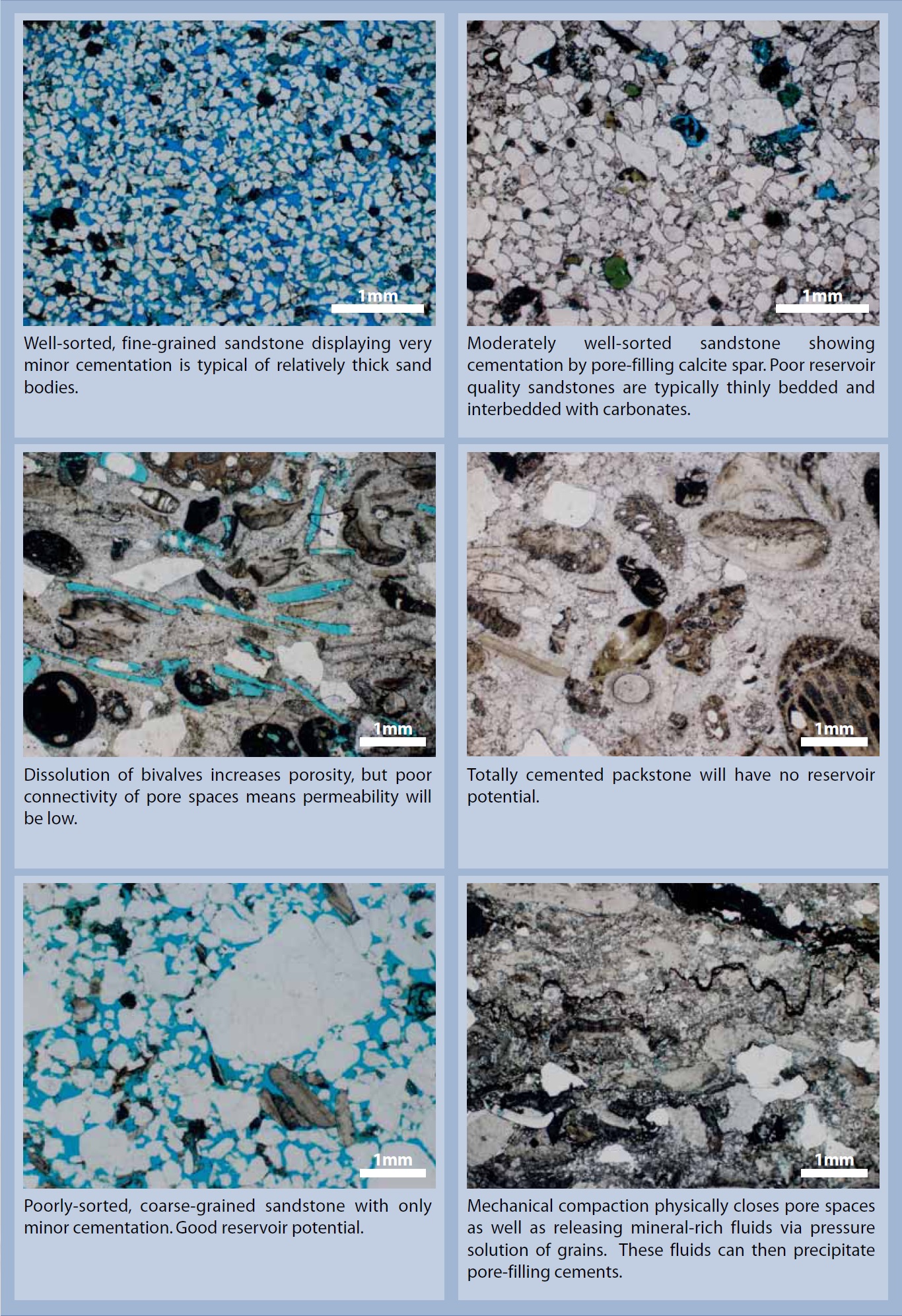 DEPOSITIONAL MODEL
The combined interpretation of lithofacies, depositional elements, subpackages and packages within the palaeogeographical and tectonic framework of the Gulf of Suez allows construction of a schematic depositional model for the Asl and Hawara Members.
The depositional model (Fig. 4A) illustrates the interpreted facies relationships and geometries associated with gravity flows on a submarine fan system.
The broader scale model depicted in Figure 4B illustrates possible sediment sources and pathways as well as controls on sites of deposition and source material.

WELL TO FIELD SCALE
This depositional model of a submarine fan system represents a single fan system, of which there are likely to be several within the October Field area. The model portrays:
• A point source fan emanating from a canyon eroded into a recently rotated footwall block of a half graben,
• Proximal and distal variations in lithofacies across the fan,
• Background deposition of detrital mudrock in areas away from the active supply of turbidity currents,
• Sediment source switching between siliciclastic and carbonate-dominated deposition, to account for the lithological variations observed in core. 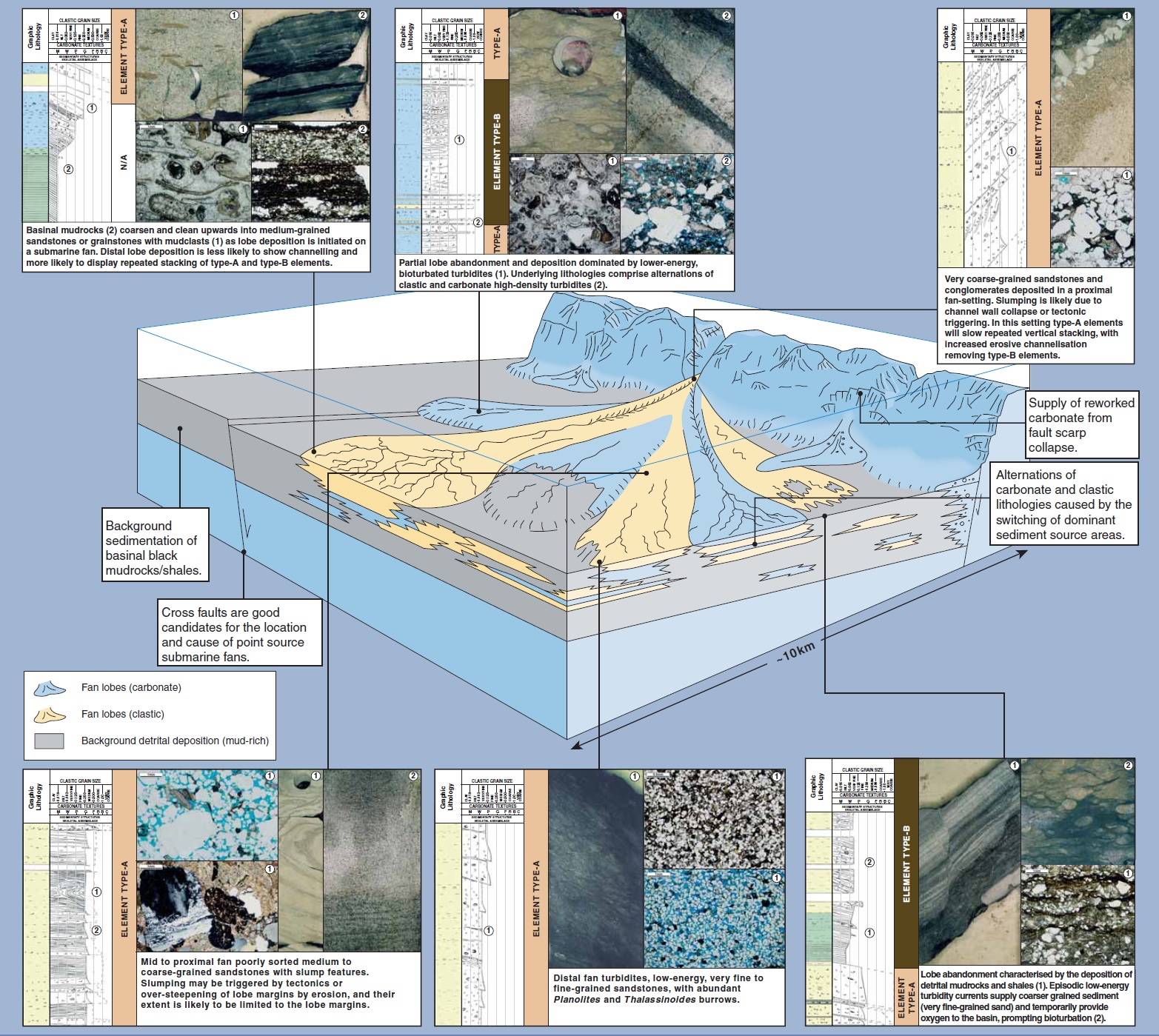 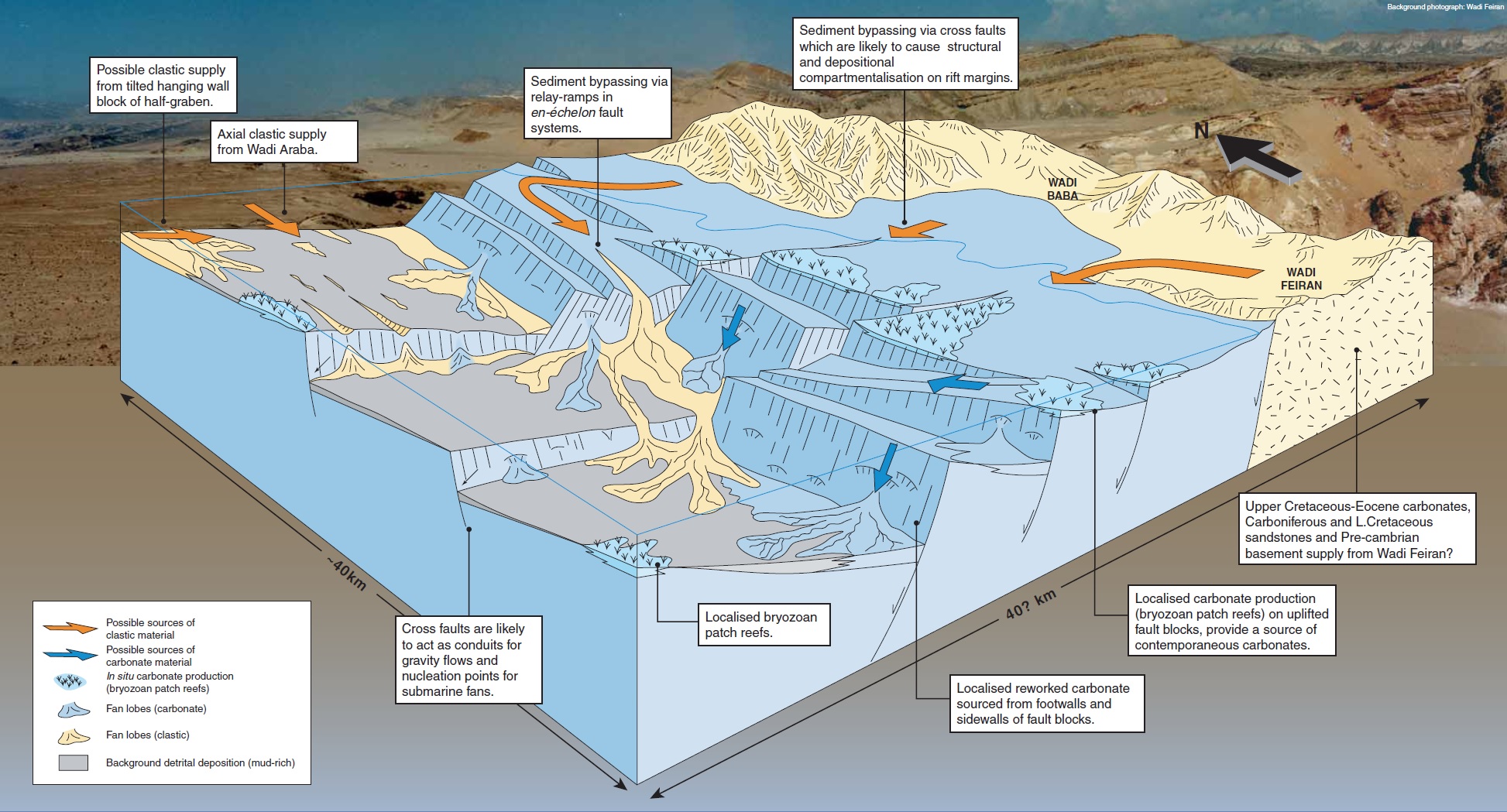 FIELD TO REGIONAL CONTROLS ON SEDIMENTATION
Figure 4B illustrates a schematic field to regional-scale reconstruction of the October Field and adjacent areas. Sediments were derived from a variety of sources and their deposition reflects control by a combination of tectonics and relative sea level changes.

CONCLUSIONS
Tectonics and palaeogeography controlled sedimentation patterns which determined the aerial distribution and degree of development of reservoir quality. Such a predictive model should enable more accurate exploration for good quality reservoirs.